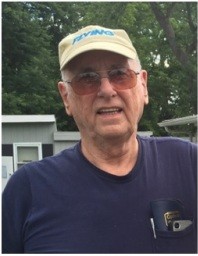 Philip E. Peters, 78, a resident of Beverly Hills, Florida, passed away on Saturday, July 11, 2020 at his home, surrounded by family.  Born on May 13, 1942 in Warrensburg, New York, he was the son of the late Lester and Capitola (DeRush) Peters.
Phil retired from Native Textiles in Glens Falls, New York.  He was a member of the Boilermakers Union out of Florida.  After retiring, he worked for the New York State Canal system.
Phil was kind and loving and valued his family and friends above everything.  He loved flying and proudly obtained his private pilot’s license.  He enjoyed hunting, boating, bowling, and traveling.  He was a jack of all trades, as evidenced by the home he built in Fort Miller, where they happily resided for many years.
Phil was predeceased by his son, Philip Peters, Jr.  Survivors include his loving wife of 39 years, Sandra (Kelly) Peters of Beverly Hills, Florida;  two sons, Melvin Peters (Jackie) of Georgia, Jeffery Peters of Georgia; one daughter, Shelly Tabor (Michael) of Georgia; one brother, Duane Peters (Tracy) of South Carolina, two sisters, Sandra McLenithan of Florida, and Sharon Blakeman (Don) of Florida; stepchildren, Tammy VanWagner of New York, Bryan VanWagner (Judith) of California, Michelle VanWagner of New York, and Karen VanWagner-Tull (Chris) of New York; 14 grandchildren, 8 great-grandchildren, and several nieces and nephews.
Due to Covid-19 and Phil’s wishes, there will be no services.
Donations can be made, in his memory, to the American Cancer Society.
The family would like to thank Vitas Healthcare (Hospice).  They also wish to thank Florida Cancer Specialists for the care he received over the past few years.

To order memorial trees or send flowers to the family in memory of Philip E Peters, please visit our flower store.
Send a Sympathy Card