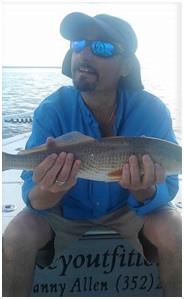 Gregory Allert Faircloth, 49 years old, of Inverness, FL passed away on August 6th, 2018.
His remains will be placed at the Florida National Cemetery, Bushnell, FL.

Gregory Allert Faircloth was born in Memphis, TN to Joyce and Raymond Faircloth on February 14, 1969 and relocated to the Atlanta area with his family in 1984.  Greg graduated from Shiloh High School, Snellville, GA. In 1987.  He studied technical drawing at Gwinnett Tech and joined the United States Army in 1989 as a Calvary Scout.  Greg was a veteran of Desert Storm and received numerous commendations, among them the ones of which he was most proud, were the South West Asia Service Medal, Good Conduct Medal, National Defense Service Medal, and Kuwait Liberation Medal.  Once out of the military he studied Law Enforcement and graduated from the NCG Law Enforcement Academy in 1992. As a police officer he joined the Stone Mountain Park Department of Public Safety where he received several awards for being Officer of the Year, Certificates for Going Above and Beyond the call of Duty, and an award for being the Venue Law Enforcement Commander during the 1996 Olympic games.
Upon leaving the police force, Greg pursued his dream of architectural design and worked for several years in the Atlanta area.  In 2005, he transferred his family to Central Florida and continued to work as an architectural designer.

To order memorial trees or send flowers to the family in memory of Gregory Allert Faircloth, please visit our flower store.
Send a Sympathy Card