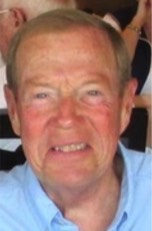 Earle “Chuck” Kircoaf, 73, of Hernando, Florida, formerly of West Chester, Pennsylvania, entered life eternal on January 24, 2021, surrounded by his loving wife and the amazing Vitas Hospice nurses.
Chuck was born on February 10, 1947, in Allentown, Pennsylvania, to David and Dorothy Kircoaf. He attended Valley Forge Military Academy in Wayne, Pennsylvania, and went on to Drexel University in Philadelphia. The highlights of Chuck’s stories about his time at Drexel include his time spent with the ROTC Drill Team and the wonderful friends he made. He graduated from Drexel with a B.S. degree in Hotel & Restaurant Management (an area of study that sometimes found him, to his delight, the only male in class). Upon graduation, he immediately began his service in the US Army at Fort Sill, Oklahoma. After serving at Fort Sill, he remained an active and proud member of the United States Army Reserves until 1980, when he was honorably discharged as Captain.
Over the years, Chuck worked as a restaurant manager for B. Altman’s Department Store in New York City, and both of his alma maters – Valley Forge and Drexel. Chuck came from a long line of savvy businessmen and women (his Grandparents started the Miller Pretzel Company in Allentown, PA), so it was no surprise when he opened his own restaurant in Philadelphia. Whether at one of the grills, behind the deli counter, or handling the business side of things, if you were looking for Chuck at the restaurant you just had to follow the sounds of laughter.
In the 1990s, a career change led Chuck to working at a small local sharpening shop, where he developed a treasured friendship with the owner. Together, they grew the business into a robust retail and sharpening/machine servicing company. Although the business was sold, the friendship continued on; talk about a great pension!
Chuck was an active member of the Free Masons, belonging to the Kennett Square Lodge No. 475 in Kennett Square, Pennsylvania, where he served as Worshipful Master in 2001. In addition to the other roles he played, he was also on the Hall Association; in this role he was able to use his experience in the restaurant industry to successfully run many pancake breakfasts that raised money for scholarships.
A lifelong Christian, Chuck attended and was active in the Unionville Presbyterian Church in Unionville, Pennsylvania, where he served as a Trustee for a number of years. When Chuck and his lovely wife decided it was time to trade-in the snow and ice for palm trees and sun, they moved to Hernando, Florida. Here, they joined the First Presbyterian Church of Inverness in Inverness, Florida. Chuck became very active in his new church as well, serving on (and at times acting as chairman for) both the Property Committee and Communications Committee. Simultaneously, he served as an Elder.
Chuck was also very active in the local chapter of SCORE (Service Corps of Retired Executives), where he acted as a mentor to individuals who were looking to create their own business in the food service industry. In addition to mentoring clients, he was a strong partner and advisor to his fellow SCORE volunteers, and joyfully assisted with various fund-raising events.
To say Chuck loved cars is an understatement; his super-power was his ability to see any car on the road and tell you the make, model, and year. But it was the Corvette that held a special place in his heart. He and his wife were members of the Touch of Class Corvette Club, where they made many wonderful friends and participated in unforgettable adventures behind the wheel.
Chuck always said to “leave them laughing.” Thanks to the many wonderful memories his family and friends have of him, he has done just that.
Chuck will be lovingly remembered by his wife of 50 years, Carol, his daughters Caren (Scott) Senior and Pam (Martin) Muir, his grandson Kevin Senior, and his mother-in-law Jean Wilson.
A Celebration of Life service will be held at 1pm on Tuesday, February 2 at the First Presbyterian Church of Inverness, 206 Washington Ave, Inverness, Florida. Masks and social distancing will be required. Due to COVID, the service will also be available online (through Zoom) at www.pammuir.com/chuck In lieu of flowers, please consider a donation to either (1) SCORE Nature Coast Florida (checks can be sent to 3810 S. Lecanto Highway, C1-101, Lecanto, Florida 34461) or (2) First Presbyterian Church of Inverness (checks can be sent to 206 Washington Ave, Inverness, Florida 34450).

To order memorial trees or send flowers to the family in memory of Earle "Chuck" Kircoaf, please visit our flower store.
Send a Sympathy Card