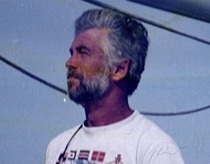 Daniel E. O’Keefe, a.k.a. “Captain Dan” 65, born Providence, RI on 2/25/52, was the son of Edward P. O’Keefe, 95, of Naples, FL and the late Margaret J. (Le Fort) O’Keefe, brother of Jean E. Cardarelli of Naples, FL and brother-in-law of the late John E. “Smokey” Cardarelli, uncle and godfather of Patricia E. Donatelli and (Craig) of North Providence, RI and great uncle to Brooke T. Donatelli of North Providence. Dan passed away peacefully at 3:05 am on Tuesday, 5/2/17, in the care of Hospice House of Citrus County.  Dan’s many accomplishments include his position as Capital Policeman, first at the State Capitol in Providence, then at the State Airport, Theodore Francis Greene State Airport, in Warwick, RI. But it was his love of the sea and sailing that mapped out his life, as he knew it.  Dan’s fondest memories were his charters from Newport, RI to various islands in the Caribbean and Mexico.  The highlight of his career was when he was called to be the governor’s liaison for all security matters between the Tall Ships and the Cadets for RI’s Bicentennial Commission, when the Tall Ships visited Newport, RI. Dan’s final wish was to have no formal wake or funeral, but to have his ashes spread out at sea, off the coast of Block Island, RI, with the following songs playing, “Wish You Were Here,” by Pink Floyd and “Into the Mystic,” by Van Morrison. Our sincere thanks go out to the wonderful, caring staff at the Hospice House of Citrus County and for the many kindnesses shown to Dan in his time of need from Pastor Douglas Alexander, founder of the “New Church Without Walls International Church,” in Hernando, FL.

To order memorial trees or send flowers to the family in memory of Daniel E O'Keefe, please visit our flower store.
Send a Sympathy Card